A beautiful South African Twitter user has taken to the social platform to disclose the amazing gift she received from her boyfriend after telling him she loves horses.

The Twitter user simply identified as @LebogangHube, was unable to keep herself calm as she took to the Twitter platform to show off her newly bought Porsche Cayenne Turbo 541 horsepower which was purchased for her as a surprise package simply because of her love for horses which she revealed to her boyfriend recently.

READ ALSO: YOU WON’T BELIEVE THE £8MILLION MANSION ROBERT MUGABE LIVED IN BEFORE HE DIED 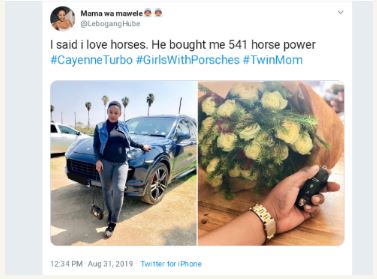