The 62nd edition of the Grammy Awards held last Sunday, January 26 at the Staples Center in Los Angeles.

There were many big wins on the night some of which were by the female folk. This post will take you through all the women that won awards at the 2020 Grammys.

American singer, Billie Elish was the biggest winner on the night as she swept home four major awards.

She also became just the second artist in Grammy history and the first woman to take home the Big Four awards: album, record and song of the year plus best new artist.

The 18-year-old is the youngest album of the year and record of the year winner in Grammy history. She was the most-nominated artist with eight nominations and the awards were her first Grammy wins.

She beat four other nominees including Burna Boy to pick up the Best World Music Album for ‘Celia’.

The win made it her fourth Grammy award win. Beyoncé won the 2020 Grammy Award for Best Music Film for her Netflix documentary HOMECOMING: A Film by Beyoncé even though she was absent.

The film, which captures her iconic 2018 Coachella performance, beat out the Miles Davis film Birth of the Cool, the David Crosby documentary Remember My Name, the Rick Rubin documentary series Shangri-La, and Thom Yorke’s ANIMA.

This award makes it her 24th award which puts her just three awards behind Alison Krauss as the female artist with the most wins in Grammy history.

She won the award for Best Jazz Vocal Album for 12 Little Spells making it her fourth career Grammy award.

Former first lady, Michelle Obama won the award in the Spoken Word Album category for the audio recording of her bestselling 2018 memoir “Becoming.”

Obama is the second first lady or former first lady to win in that category. Hillary Rodham Clinton won the 1996 award for It Takes a Village while she was the first lady. 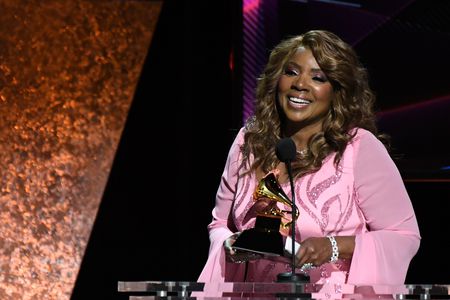 Gaynor won her second Grammy Awards for Best Gospel Album for ‘Testimony’. What is interesting to know is that this award comes 40 years after her first award.

Now 70, Gaynor won her first Grammy in 1980 for the dance floor anthem “I Will Survive” in the best disco recording category.

She also won the Best Compilation Soundtrack for Visual Media award alongside Bradley Cooper, Lukas Nelson, and others won a Grammy for their soundtrack to A Star Is Born.

Hildur Guðnadóttir has made Grammy history as the first solo female to win the award for Best Score Soundtrack for visual media in the Awards’ 62-year history.

The Icelandic composer, who scooped the award for her Chernobyl soundtrack, has already had historic award wins this year, including when Joker made her the first woman to win ‘Best Score’ at the Golden Globes last month.

Guðnadóttir has also received an Oscar nomination this year for her Joker score.

Benedetti who is from Scotland was also the first classical solo violinist to perform at the Grammy Awards Premiere Ceremony in 10 years.

Border Closure To Remain Till Objectives Are Achieved – NSA