Yamarita or egg-coated yam is just as the names imply. Yam pieces that have been coated in an egg mixture are deep-fried till they have a crunch – looking outer layer. They can be eaten either with fried stew any other form of sauce you choose.

Instead of your regular yam and egg dish, Yamarita is a good variation that does not take time to prepare and can double as a snack as well.

Using served with sauce, This simple recipe gives a lovely twist to your regular yam and egg and we think after reading this you will want to try it right away. 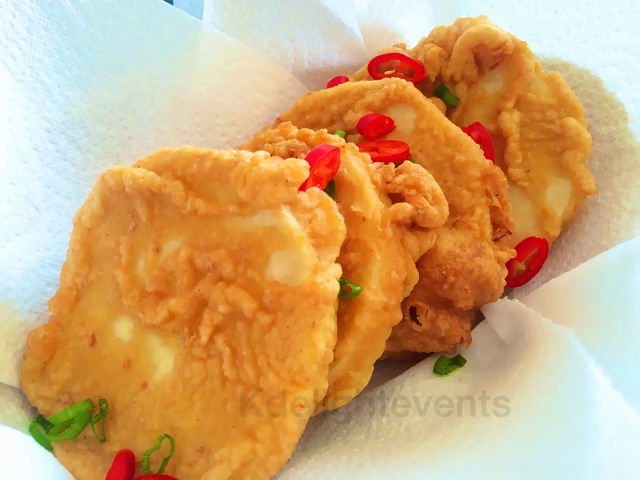 The ingredients you will need to prepare it are

Peel and cut the yam into rectangular shapes and boil for 3-5 mins. Add some salt.
2. Check your yam by putting your fork in the yam. If it goes through then it’s soft enough, remove from the fire and drain the water to stop the cooking process.

3. Beat the eggs in a separate bowl, add a pinch salt and seasoning, whisk together and set aside.

4. In a separate bowl, mix the flour with dried pepper and some seasoning spices(Curry Tyyme) as well and set aside.

5. Heat up some oil in a frying pan (enough oil that can deep fry the yam), when the oil is hot, take the yam and soak it in the beaten eggs and make sure it soaks in.

6. Once soaked remove from the egg and roll it in the flour and dried pepper mixture (making sure the flour covers all the sides of the yam) then put inside the hot oil.

7. Do this same process to all the pieces of the yam and after frying, arrange them on a paper towel to remove excess oil.

-Blend the pepper and onions (don’t blend smoothly) then boil the blended pepper so that the water can dry out.

-Heat up a little oil and fry the onions then add the blended pepper. Season to your desired taste.

1,083 thoughts on “Recipe: How To Prepare Yamarita”